In the 1980s, when Hongshan jade broke out in the Liaohe River Basin, this exquisite instrument from the ancient jade center became the treasure of the Chinese people. This beautiful and charming Hongshan jade, like its name, is the crystallization of the material and spiritual life of the ancestors of 5,000 years ago. It is a beautiful rendition of the jade era and the love and jealousy of today's collectors. During the period of Hongshan jade, thousands of years, each period has its own characteristics. Among them, the early Hongshan jade is relatively simple and rough. In the five or six thousand years, the light produced is not grainy but more delicate.

Yulong, Yuzhulong, and Gouyun-shaped jade are the most representative jade articles. In 1971, a piece of Hongshan culture Yulong was unearthed from the Samsung Tara Village in Wengniute Banner, Inner Mongolia. This is the earliest and best preserved dragon image in China. The jade dragon is carved from a piece of dark green nephrite. The body is curved in a "C" shape, with a raised neck, a curved back, a snout, a truncated nose, a bobbin upturned, a head like a pig, and a neck. The dragon's back is centered on a hole. In addition to the faucet part of the dragon, the embossed and intaglio means express the eyes, nose and mouth. The dragon's body has no grain, and the whole body is polished, making it look like a snake and an angry stun. The dragon's shape is large and the carving is fine. It is rare in the world. It may be the symbol of the worship of the Red Mountain ancestors or the symbol of the clan tribe and the protector of God. It may also be the ritual of the priests praying for rain. 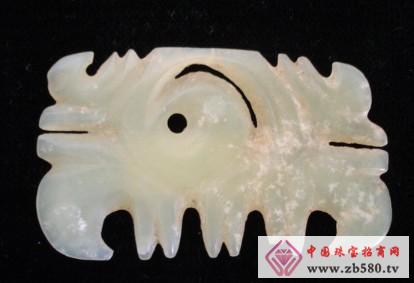 Jade Pig Dragon is a typical representative of Hongshan culture jade. Its shape is extremely rich in pigs. Pigs occupy an extremely important position in the primitive society. In various sacrificial activities, it is natural to use pigs as a medium between humans and gods. Things. The cultural relic worker discovered a jade pig dragon in Jianping County, Liaoning Province. It has a body such as a ring, a fat head, a round eye, a wrinkle, a mouth and a fang. The gap between the head and the tail is not completely broken. There is a circular drill hole in the department. The pig dragon is polished, smooth and smooth, and has a vivid shape. It is the largest and most regular shape of the similar jade in Hongshan culture. It may be a totem of a clan tribe, a priest's instrument, or a symbol of wealth, identity, and status.

Gouyun-shaped jade is also one of the representative jade articles of Hongshan culture. It is not a general ornament, nor is it a direct imitation of a certain tool or a specific animal, but is specially made to adapt to the religious ceremony at that time. In the Sanziguanzizizi Mountain, Lingyuan County, Liaoning Province, a hook-shaped jade is unearthed. It is made of light green jade and has a rectangular thin plate shape. The center hollows out as a hook-like cloud, and the four sides are hooked and rounded. On the front and back sides, the front side grinds out the shallow groove that is in line with the center pattern, and the reverse surface photon has no grain. The hook-shaped jade is gentle and dynamic, and its meaning is profound. It is a larger and more regular one in the same kind of utensils. From the hook cloud shape jade is usually unearthed in the higher level of the central tomb, and placed in the main part of the tomb of the tomb owner, etc., it may be a special item of the priest at that time, may be used to communicate with the priest and heaven or ancestor The medium between the spirits has a special status and role that cannot be replaced by other objects.