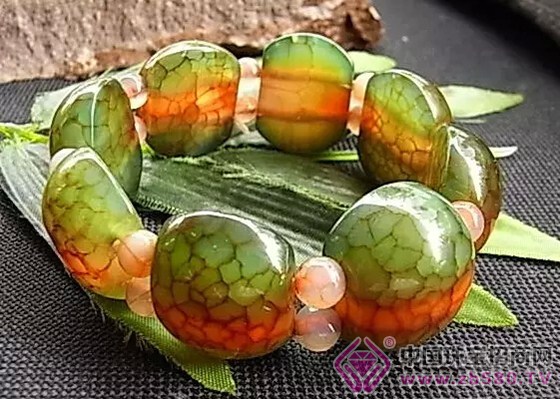 Dragon agate refers to agate varieties with irregular lines on the surface. The formation process is very complicated, mainly due to large-scale geological changes after the formation of agate, long-term exposure to high temperature or low temperature, and finally the formation of dragon agate. Textured like a dragon or dragon scale.

After knowing what is the dragon agate, how to identify the true and false of the dragon agate is believed to be the most concerned issue for everyone. Everyone wants to know the answer so that they can have experience in the future when they actually choose agate. What are natural agates and which are synthetic fake agates?

If you can firmly believe that there is still a real dragon agate in the market, naturally your chances of being deceived will be greatly reduced. There is almost no natural dragon agate on the market, and all the dragon agates are basically artificially dyed or "popcorn agate" which is blown out by high temperature. Although the artificial fake dragon agate has a good appearance, the price is very low.

Looking at such a watery texture and unique texture, is it a heart? When you know that it was made manually, are you still excited? â†‘â†‘

The artificially created dragon agate is not the same as the natural agate species. It not only does not have the abundance and effect of agate, but even the long-term wear is harmful to the body, and the "popcorn agate" that is blown out at high temperature is relatively better. The dyed dragon agate is also immersed in a long time of chemical syrup, which is very unsuitable for people to wear.

Since the dragon agates of the entire market are all made by hand, basically no longer talk about the authenticity and false identification, because the real natural dragon agate is too few, since it is all fake, what about it? !

In addition, the price of natural dragon agate is also quite high, it is not that you can find a small amount of money.

However, the current situation is that some farmers in the tourist attractions have begun to sell some of the rumors that have been passed down from their homes. Among them, there is no shortage of "Dragon Agate." If you don't have a greedy heart, how can you not think of it: "Since it is the ancestral baby, why sell it to tourists?" Lack of money? Certainly not, the only conclusion is that the peasmen sold by the farmers near the tourist attractions are all low-priced goods piled up from the wholesale market. If they are sold to tourists by means of tourist souvenirs, it is understandable, but these goods are sold as genuine gems. Every day, countless tourists are deceived with the mentality of scouring the real baby. They spent hundreds of thousands of dollars to buy counterfeit goods worth ten or twenty yuan. This is obviously the behavior of the consumers.

In fact, no matter what jewelry you buy, jade, hetian jade, tourmaline, turquoise or amber wax, etc., in the shopping malls of your city, where to buy jewelry, avoid greed, jewels Are valuables, the price will not be "free" cheap, especially those "ancestry", "snobbery", buy a medicine!